Logic might have suggested when Evanescence leader Amy Lee had her first child, a son named Jack, three years ago, that motherhood would have meant she would step back from music to some degree.

After all, raising an infant is a major, time-consuming effort in itself, and being a parent is bound to shift priorities away from one’s vocation and toward family life.

For Lee, becoming a mother has had the opposite effect, triggering a new level of musical inspiration and paving the way for the unique new Evanescence album, Synthesis, and an ambitious tour to support the album.

“I always did want to be a mother,” Lee said during a mid-October phone interview. “It’s the most beautiful thing I’ve ever experienced. It opened my heart up in a way I didn’t expect. So as much of my attention, as much of my focus as [parenting] takes up, it really inspired me. I feel more feelings. I think differently. There’s a new perspective to everything in life since Jack. And I wasn’t prepared for that. You can’t prepare for that. So it actually made me want to come back to work. I was recording when I was pregnant. I released Aftermath after Jack was born.”

Aftermath served as the soundtrack album to the Mark Jackson movie, War Story. Lee was brought in to contribute to the score and soundtrack of the film by her friend, Dave Eggar, who had been recruited for the project by Jackson. [Source] 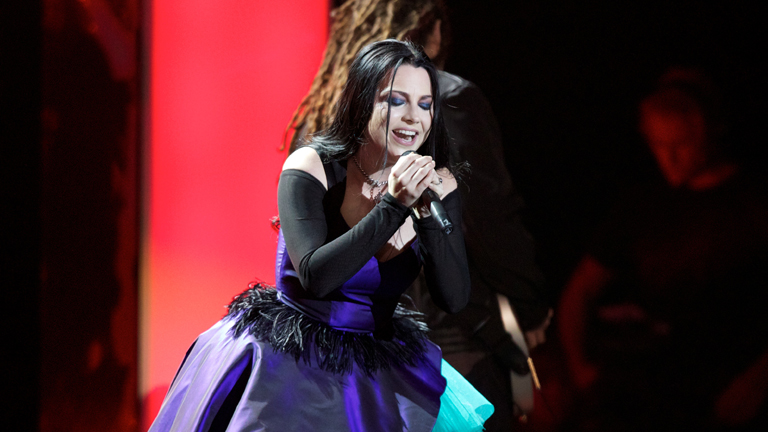 War Story fulfilled a long-time ambition for Lee to compose for film. It was the first of several projects she undertook after putting Evanescence on hiatus in late 2012.

She might have gotten into film composing earlier if Evanescence hadn’t come along first.

“I was in school studying composition and my main plan was to really study music for real and become a composer, to be like a David Campbell, to make music for film,” Lee said. “That’s what I always wanted to do. And then the band got signed and took off and I ended up doing that full time, which has been a wonderful [thing]. I feel like I’m coming to a point in my career where I’m actually getting to live out both dreams.”

Evanescence ended up doing much more than just getting a record deal. Formed by singer/pianist Lee and guitarist Ben Moody in Little Rock, Arkansas in 1995, the group saw life change radically when their 2003 album Fallen, took off behind the hit songs “Bring Me to Life” and “My Immortal.” The album eventually sold 17 million copies and won Grammy Awards in 2004 for Best Hard Rock Performance (for “Bring Me to Life”) and Best New Artist.

There have been bumps in the road for Evanescence since, including the departure of Moody in 2003 and further personnel changes that saw Lee bring on three new musicians — bassist Tim McCord, drummer Will Hunt and guitarist Troy McLawhorn – before the touring cycle behind the popular 2006 album, The Open Door, was complete. (The current lineup also includes guitarist Jen Majura.)

That lineup made the most recent Evanescence studio album, a 2011 self-titled album.

After wrapping up touring behind the Evanescence album, the band went on an open-ended hiatus, which prompted speculation over whether Evanescence would remain a band.

It turns out, though, that the time away from Evanescence gave Lee a chance to not only start her family with husband Josh Hartzler, but stretch her wings artistically and eventually confirm to herself that Evanescence is a vital foundation in her musical life.

Of course, there was the soundtrack work for Lee, not only on War Stories, but also the short film Indigo Grey: The Passage. Her song “Speak To Me,” served as the end title theme to the film Voice from the Stone.

Along with those projects, Lee rediscovered her passion for Evanescence. “I naturally come back to Evanescence because it really is who I am. It really is deep within me,” Lee said. The group returned to the public eye in 2015.

Lee then hatched the Synthesis album project. Working closely with noted orchestrator/arranger David Campbell, Lee and the other members of Evanescence have re-imagined a dozen songs from the band’s back catalog (plus two new songs). Synthesis showcases new, more prominent string arrangements, replaces the drums with programmed rhythms and dials back the big guitars that have been part of the goth/classical-tinged hard rock of Evanescence’s studio albums.

The tour to support Synthesis is as ambitious as the album itself, as Evanescence will be joined on stage by a local orchestra in each city on the tour. (Their stop this week at the Center for the Performing Arts is already sold out.) Lee said one thing she loves about performing in the Synthesis format is this new instrumental/sonic setting for the songs brings out different emotional elements in the songs and allows her to bring a more nuanced approach to her vocals.

“It enables me to really sing more like I sing in the studio. Typically I’m fighting the big distortion of the guitars and the big drums,” she said. “There’s still plenty of sound for me to stand up against, but it’s different. It feels different, for sure. And it does enable me to sing differently. I’m using a different microphone that’s a lot more sensitive and it’s really fun to sing in a much more dynamic way live.”

Amy Lee Has Had To Fight For Her Art