Amy Lee: ‘I Think This Is Just A Really Cool Moment In Time’

It’s the day after Halloween and Evanescence frontwoman Amy Lee is in between shows during possibly the band’s most ambitious tour to date. Out in support of their new Synthesis album, a collection that finds the group reworking signature songs like “Bring Me To Life” and “My Immortal” into orchestral versions, the band is playing on a nightly basis during the limited tour with orchestras.

Lee has also her three-year-old son Jack and husband Josh Hartzler on tour with her. It’s a lot to balance, as she says, “I feel like I’m the busiest I’ve ever been.” But it’s also clear talking to her it’s one of the most gratifying times in her life.

The ease and calmness in her voice as she talks about perspective and the joy she found at being on stage but still having Josh being able to take Jack trick or treating in the arena is very clear. It’s a prosperous and creative time for Lee and Evanescence.

Even she is not sure where this orchestral period will lead for the band. But as she also tells me, “I’m absolutely positive I’m gonna remember these performances and this very special experience for the rest of my life.” [Source] 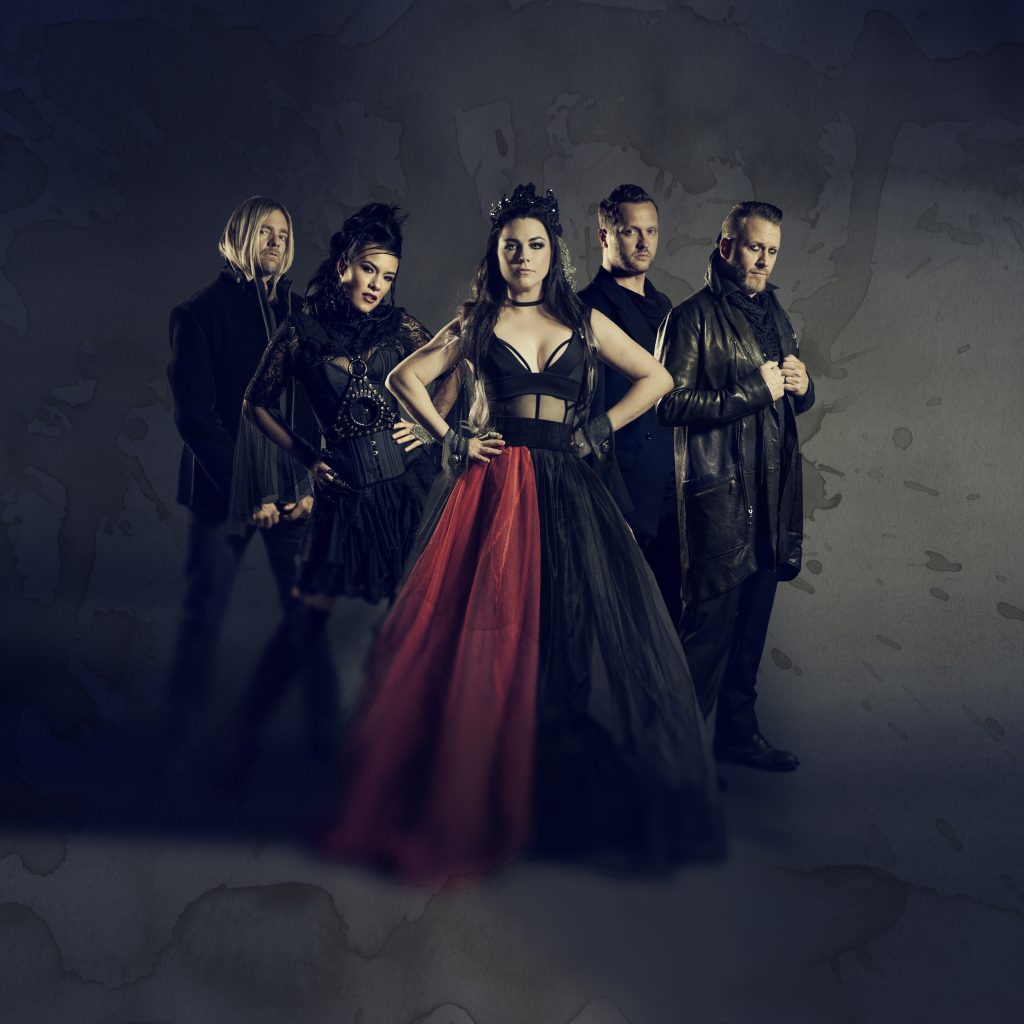 Steve Baltin: How was your Halloween?

Amy Lee: I didn’t dress up, I was on stage. I was working, but I love my job so it was good. Jack, my son, is three and he and my husband Josh are actually out on the tour with me, so they dressed up. And we did go around to band and crew right before the show and all put candy in all their pockets and asked them for candy, which was very cute, funny and different. But he had a blast. Halloween was always my favorite holiday in a lot of ways, so I felt happy again cause I wasn’t expecting to be able to celebrate at all. But it kind of all came together. Thank god for three A.M. Walmart runs to find last-minute costumes.

Baltin: What was your best Halloween costume ever?

Lee: Ooh, that’s a tough one. I always made my own costumes. So it’s usually just the funniest thing on earth to look at my old costumes because they’re hand-sewn things where everybody would have to ask me, “What are you?” I remember one year in particular I was an angel on one side and devil on the other. There was like a line down my face and down the whole outfit. It was white on one side and supposed to be red on the other side, but actually turned out pink cause I was trying to dye things and I was 13 years old. I actually want to say that was my worst costume ever (laughs).

Baltin: How gratifying is it that you can do what you love and be on stage and Jack still gets his Halloween?

Lee: I am extremely grateful. It takes a lot of people to make everything that’s happening happen. We have our friends out helping us take care of Jack. A lot of people are helping me, and my husband too, he works non-stop to make the Jack thing happen. So I feel super grateful. I’m the busiest I feel like I’ve ever been, being on tour and being a mom. And also the fact the tour is totally new territory for us. It’s a lot, every day is completely packed from start to finish. But I feel really happy.

Baltin: Does it make it easier to try the new stuff musically because you now understand no matter what happens being a mom comes first? So there is less pressure on the music.

Lee: Totally, absolutely, it’s all about perspective. And the perspective it’s given me is really healthy because it makes everything else a little bit less scary. If it doesn’t work out, okay, whatever and then I go and grab Jack cause being a mom first definitely is the most important thing. So it lets you rest a bit emotionally in that it’s not like your entire day is only filled with your job. Perspective is big thing on this album actually. There are a lot of different angles, things that make the arrangement and songs different. The way that I’m able to perform, especially some of the really older songs is from the perspective of having been through so much, having had a relationship and history with these songs, and also things like becoming a mom makes me look at the entire world differently. And there’s a new depth in some of the lyrics for me that couldn’t have been there for me when I was 17 years old.

Baltin: What are some of the moments you hear differently now?

Lee: One example is “My Immortal.” I seriously considered not putting it on the album, but it’s this really cool opportunity to do it again. The version that I hear 99.9 percent of the time, I’m in a grocery store and it comes on, is this old demo that I cannot stand. It’s not even a real piano and it’s me singing late at night at my dad’s work where they had a studio and he let us go in there and record and I was in high school. So part of me just wanted to rerecord it and it was just too good of an opportunity to put a new version with David Campbell’s beautiful arrangement at the top of the pile. But that song I’ve never really felt close to. It was written a really long time ago, but now it’s become this big part of our history between our fans and me and I think about the song and the way it makes me feel now. It’s about them, it’s about my relationship with our fans over the years.

Baltin: It is so funny though because as an artist there are always things you wish you could do over and want to change.

Lee; That’s exactly right and that’s a big part of the catalyst. There’s this older recording of “My Immortal” I can’t stand, so I’ll take this opportunity to do it again and do it like I know I can do it now and make something I love more. Most of this stuff is more about it’s not like I didn’t the original, it’s that we showed the pumped-up rock side well and now I want to show some of those things like the beautiful generations in the past, programming a world that is such a big part of our sound, but ends up in the background most of the time. I wanted to take a chance and push that into the forefront and just show people a totally different part of our music that’s always been there.

Baltin: How has the fan response been?

Lee: I think our fans like it a lot. It’s w ay to experience this music, for them and for us, in a different way. We’ve been playing the straight-up original versions of our songs for many years now. So to have an opportunity to go to a different venue for most of these shows, go to a concert hall, sit down and listen to it, it’s a lot more like going to a show, like going to a movie, than going to a rock concert where you’re gonna jump up and down and make noise. There are parts that are very intimate before it goes big and epic and 28 orchestral musicians are going off. So it’s a very personal experience. The reaction I’ve seen has been really good, but it’s definitely different. It feels still weird to us on stage, we’re getting completely used to it. It’s definitely not a rock and roll show, but I think it’s really special and I’m absolutely positive I’m gonna remember these performances and this very special experience for the rest of my life.

Baltin: How is it inspiring you going forward? Do you see yourself wanting to write more orchestral works or film scores?

Lee: It’s kind of the other way, that’s what I’ve been doing. Between the last Evanescence record and now I’ve been doing a lot of stuff on the side, doing the more film soundtrack score world and working more in that way just to please myself. I enjoy doing it very much. And this is me being a little less intimidated by that and ready and brave enough to kind of mess with our music. So I just wanted to because it felt good. There’s really no big plan. It’s really expensive, it’s probably not smart marketing wise. I had a creative idea and it felt good so we did it. I really like contrast. I really like extremes. So it’s cool to be able to take this this total contrast from European metal festivals we were playing this summer and then go totally full orchestra concert halls later in the year. It feels really good to me, so I’m just saying whatever comes from us next and what this means for our trajectory I don’t know that it means going deeper into this world. I think this is just a really cool moment in time.