Evanescence took a risk with their 2017 album Synthesis by reconstructing its material into elegant orchestrations that enhanced aspects of its music that are often ignored. Then it upped the stakes by bringing the production on the road with a rotating cast of symphony members at each stop. The band delivered a riveting performance during Friday Night’s (Aug. 10) date at PNC Bank Arts Center in Holmdel, N.J., where the backing ensemble impressively brought to life the classical elements that infuse Evanescence’s music. Following the captivating set was a smart pairing with electric violinist Lindsey Stirling, a co-headliner who energetically balanced the evening.

The two acts utilized the symphony in contrasting ways. Evanescence could have been tempted to pump up the bombast at every turn since its catalog possesses a fair share of melodrama. But the full force of the orchestra was only unleashed when building up to the zenith of highlights including “Bring Me to Life” and “My Heart Is Broken,” increasing its impact.

The same could be said for singer Amy Lee, who alternated between sitting behind a piano and swaying before a mic stand as she delved into every nuance of her vocals. It would have been appropriate to go total diva, but her emotional connection to the material propelled her voice rather than all the wind in her lungs. It especially paid off when she serenaded the crowd with the practically a cappella “My Immortal.” Singing to a galaxy of cell phone lights, Lee won a much deserved standing ovation for her stirring rendition of the ballad. 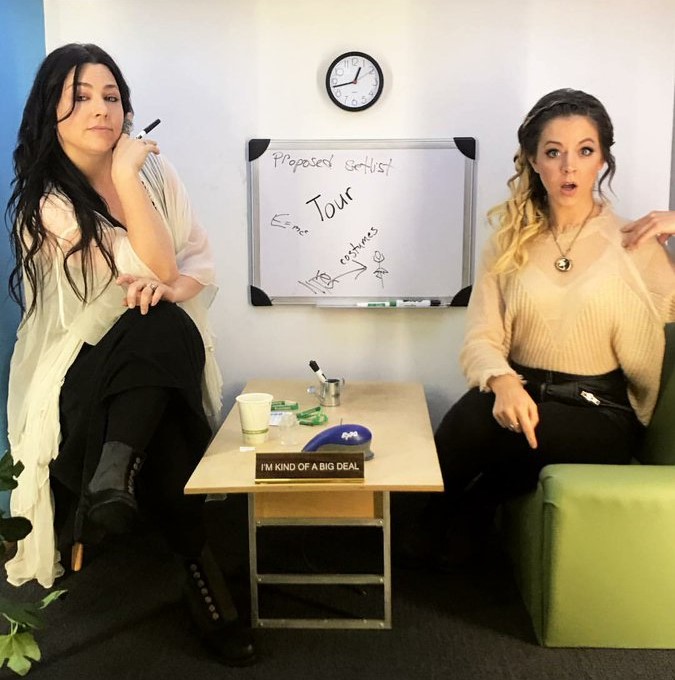 Now that Evanescence could properly present its music recorded with a string section, the song “Lacrymosa” swanned along as smooth as glass, while the jagged introduction and the horn section to “Imaginary” was even more intense, and the bridge of “Lost in Paradise” swelled into a cinematic apex. Nonetheless, when Lee performed the desolate track “Your Star,” her haunting voice and eerie piano reminded listeners that those elements remain the pulse of Evanescence’s sound.

Conversely, except for more tempered numbers like “Crystallize” and “Lost Girls,” the orchestra performed with gusto from the moment Stirling took to the stage with “The Arena.” Whereas Evanescence dialed back its rock components to focus on making a deep emotional impact, the entertainment Stirling provided was buoyed by percussion, vitality, unabashed smiles and production values including multiple costume changes, gymnastic-skilled dancers and playing her violin atop a pedestal that nearly reached the rafters during the stratospheric “Take Flight.”

Stirling’s neoclassical style, which blends hip-hop with electronica and occasional Celtic flashes, translated into a high-energy show filled with vivid color as she pranced through “Moon Dance,” “Shadows” (wrapping up that song by moonwalking across the stage), “Roundtable Rival” and “Mirage.” She leaped across the stage as much as her dance troupe did, often perching on one leg like a flamingo as she energetically bowed her instrument attached to her chin like a fifth appendage. The frenetic pace was broken up with a few interludes where Stirling sincerely pitched the audience about the power of positivity and how it changed her life after she struggled with depression and anorexia.

It would have been a wasted opportunity if the two leading ladies didn’t unite onstage, which they did twice. Stirling first appeared when she joined Evanescence for “Hi-Lo” to re-create the violin solo that she contributed to the track on Synthesis, and Lee returned the favor by performing the vocals to “Shatter Me” (originally done by Halestorm’s Lzzy Hale) during Stirling’s set. Both of them paid compliments to each other, with Stirling offering a love letter by playing an amusing video of herself dancing and lip-synching to Evanescence as a teen. Given the mutual admiration and the success of their onstage pairing, don’t be surprised if they rejoin forces somewhere down the road.