Amy Lee seems to be diving deeper into the world of film music. After War Story, INDIGO GREY and Voice From The Stone, it was revealed in an interview with A Child Grows in Brooklyn that Lee was writing music for a fourth film. On September 14th, an MTV News article stated that the new movie was title Blind, written by John Buffalo Mailer, directed by Michael Mailer and starring Alec Baldwin and Demi Moore. The composer of the film’s score is Dave Eggar, with whom Amy has previously collaborated on Aftermath, the soundtrack to War Story. According to @EvTod, Chuck Palmer is also part of the film’s score team. It is still unknown to what extent (closing titles song, score etc.) Amy is involved in the soundtrack. 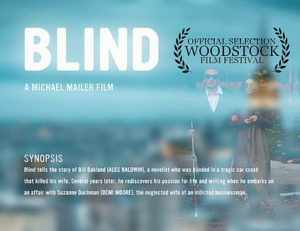 On September 15th, it was announced via an official Press Release that the movie will be premiering for the first time at Woodstock Film Festival in New York on October 13th, 2016. You can download the festival’s program, featuring Blind, by clicking here. Articles on Daily Freeman and IndieWire also talk about the movie’s world premier. A trailer is still to be released, while the movie is expected go to cinemas around the world later this year. [Source]