Evanescence Amp Up the Drama with Orchestra @ LA’s Greek Theatre

Evanescence lead singer Amy Lee made the leap from goth-rocker to opera diva last night, as she and the band led a 20-piece orchestra through a sold-out performance at the Greek Theatre Sunday night, previewing the group’s fourth album, “Synthesis,” which comes out November 10.

Both the concert and the album — Evanescence’s first since its self-titled 2011 effort — offer a reimagining of the group’s catalog with a full symphony orchestra, arranged by none other than Beck’s father, veteran arranger David Campbell, whose collaboration with the band dates back to its first album. The concert was the second of Evanescence’s current “Synthesis Live” tour, as they team up with a different symphony orchestra (under the direction of conductor Susie Seiter) in each city for an 80-minute, 18-song set.

Looking more like Maria Callas than Grace Slick in a billowing floor-length black gown with a plunging neckline, Lee firmly re-establishes herself as one of rock’s pre-eminent vocalists, exhibiting an impressive range that still packs a wallop, this time cutting through a full orchestra. Although the set includes just two new songs (the single “Imperfection” and the encore, “Speak to Me,” performed solo by Lee for the film “Voice From the Stone” earlier this year), there is also “Hi Lo” (a 10-year-old song recorded for the first time on the new album) and a pair of newly composed orchestral/piano interludes. Still, she and the ensemble turn the familiar material — including crowd favorites like the Grammy-winning “Bring Me to Life,” “My Immortal,” “Lithium” and “Your Star” — into full-throttle, wide-screen epics, its themes of loss, guilt and self-doubt enlarged to tragedy on the Greek proscenium. 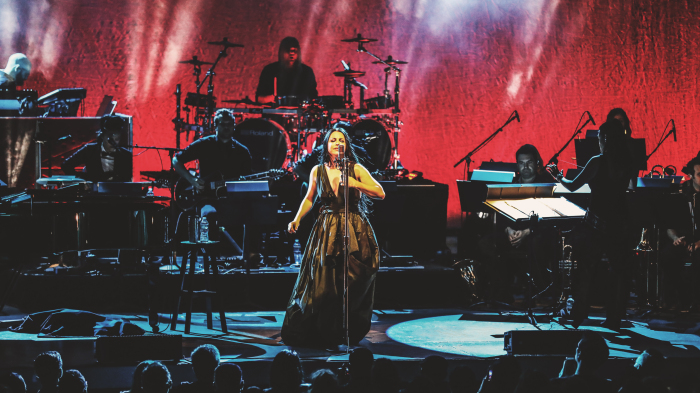