Lindsey Stirling, Amy Lee, Evanescence tour: We ‘lift each other’

From upi.com: Violinist and dancer Lindsey Stirling said touring with Amy Lee and Evanescence offers an important message about how the best way to empower women is for them to support each other.

“Rather than waiting for everybody to let us into those offices, we’re going to be the ones to lift each other,” Stirling said, adding she is interested in composing music with other women and chose to go on tour with Evanescence, in part, because it is led by a woman.

The artists will perform their own concerts with various live orchestras throughout the country and will also make guest appearances in each other’s sets. A female conductor has also been employed for their upcoming road show.

Stirling and Lee told UPI they have been fans of each other’s work for years and are excited to tour together this summer.

“What I really love about Lindsey the most is I feel like she created her own genre,” Lee, 36, said recently during a Live Nation press day in New York. “I don’t know of another person who has gone out as an instrumentalist, like a violinist, and had this amazing, mainstream presence.”

“I have been a huge Amy fan, huge Evanescence fan. When I heard ‘Bring Me to Life’ for the first time, I was just so struck by the contrast in the music,” said Stirling, 31. “When I started to create my own music, I wanted to have that same contrast in my music, this light versus dark and this edgy versus smooth and soaring.”

Stirling — who is famous for viral videos such as “Crystallize” and “Shadows” — said she doesn’t expect the inspiration she draws from Lee to fade now that they are working together.

“I think that is really a unique story for me to get to tell as I enter the stage every night. Hey, I never would have expected as a teenager that I would one day get to share the stage with my idol. And to be like: ‘Guys, dream it, believe it, see it. Because it could happen.'”

Lee said she is thrilled and a little anxious about performing Evanescence songs such as “My Immortal,” “Lithium” and “Everybody’s Fool” with new orchestral musicians in each city they visit.

“It’s a beautiful tightrope live,” she said. “It’s weird and it’s scary. Anything could happen.”

Lee said she has wanted since she was a teenager to perform with a full, live orchestra, but always thought it was too expensive and difficult to organize until her new management team came along and helped her realize her dream.

“I simultaneously wanted to be in a rock band and wanted to be Danny Elfman and score film and the sound of the band really is sort of a combination of those things,” she said. “It just felt like it would be so fun and fulfilling to finally show a whole other side to the music that I really feel very connected to.” [Source] 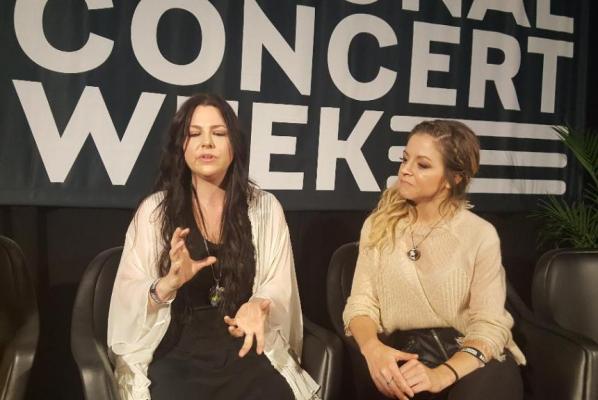